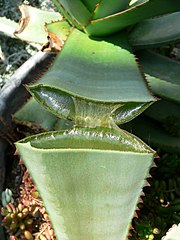 Succulent plants, such as this aloe, store water in their enlarged fleshy leaves, stems, or roots, as shown in this split aloe leaf. This allows them to survive in arid environments.

Aloe ( /ælˈoʊi/, /ˈæloʊi, ˈæloʊ/), also written Aloë, is a genus containing over 550 species of flowering succulent plants.[3] The most widely known species is Aloe vera, or "true aloe". It is called this because it is cultivated as the standard source for assorted pharmaceutical purposes.[4] Other species, such as Aloe ferox, are also cultivated or harvested from the wild for similar applications.[5]

The APG IV system (2016) places the genus in the family Asphodelaceae, subfamily Asphodeloideae. Within the subfamily it may be placed in the tribe Aloeae.[6] In the past, it has been assigned to the family Aloaceae (now included in the Asphodeloidae) or to a broadly circumscribed family Liliaceae (the lily family). The plant Agave americana, which is sometimes called "American aloe", belongs to the Asparagaceae, a different family.

Most Aloe species have a rosette of large, thick, fleshy leaves. Aloe flowers are tubular, frequently yellow, orange, pink, or red, and are borne, densely clustered and pendant, at the apex of simple or branched, leafless stems. Many species of Aloe appear to be stemless, with the rosette growing directly at ground level; other varieties may have a branched or unbranched stem from which the fleshy leaves spring. They vary in color from grey to bright-green and are sometimes striped or mottled. Some aloes native to South Africa are tree-like (arborescent).[7]

The circumscription of the genus has varied widely. Many genera, such as Lomatophyllum,[8] have been brought into synonymy. Species at one time placed in Aloe, such as Agave americana, have been moved to other genera.[9] Molecular phylogenetic studies, particularly from 2010 onwards, suggested that as then circumscribed, Aloe was not monophyletic and should be divided into more tightly defined genera. In 2014, John Charles Manning and coworkers produced a phylogeny in which Aloe was divided into six genera: Aloidendron, Kumara, Aloiampelos, Aloe, Aristaloe and Gonialoe.[10]

Over 500 species are accepted in the genus Aloe, plus even more synonyms and unresolved species, subspecies, varieties, and hybrids. Some of the accepted species are:[3]

In addition to the species and hybrids between species within the genus, several hybrids with other genera have been created in cultivation, such as between Aloe and Gasteria (×Gasteraloe), and between Aloe and Astroloba (×Aloloba). 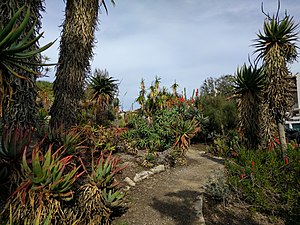 Aloe species are frequently cultivated as ornamental plants both in gardens and in pots. Many aloe species are highly decorative and are valued by collectors of succulents. Aloe vera is used both internally and externally on humans as folk or alternative medicine. The Aloe species is known for its medicinal and cosmetic properties.[11] Around 75% of Aloe species are used locally for medicinal uses.[11] The plants can also be made into types of special soaps or used in other skin care products (see natural skin care).

Numerous cultivars with mixed or uncertain parentage are grown. Of these, Aloe ‘Lizard Lips’ has gained the Royal Horticultural Society’s Award of Garden Merit.[12]

Aloe variegata has been planted on graves in the superstitious belief that this ensures eternal life.[13] 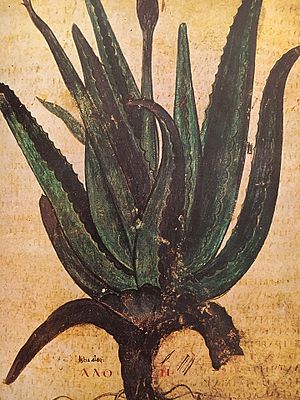 Depiction of Aloe, labeled in Greek "ΑΛΟΗ" (Aloë) from the Juliana Anicia Codex, a copy, written in Constantinople in 515 AD, of Dioscorides' 1st century AD work.[14]

Historical use of various aloe species is well documented. Documentation of the clinical effectiveness is available, although relatively limited.[4][15]

Of the 500+ species, only a few were used traditionally as herbal medicines, Aloe vera again being the most commonly used species. Also included are A. perryi and A. ferox. The Ancient Greeks and Romans used Aloe vera to treat wounds. In the Middle Ages, the yellowish liquid found inside the leaves was favored as a purgative.[14] Unprocessed aloe that contains aloin is generally used as a laxative, whereas processed juice does not usually contain significant aloin.[16]

Some species, particularly Aloe vera, are used in alternative medicine and first aid. Both the translucent inner pulp and the resinous yellow aloin from wounding the aloe plant are used externally for skin discomforts. As an herbal medicine, Aloe vera juice is commonly used internally for digestive discomfort.[17][18]

According to Cancer Research UK, a potentially deadly product called T-UP is made of concentrated aloe, and promoted as a cancer cure. They say "there is currently no evidence that aloe products can help to prevent or treat cancer in humans".[19]

On May 9, 2002, the US Food and Drug Administration issued a final rule banning the use of aloin, the yellow sap of the aloe plant, for use as a laxative ingredient in over-the-counter drug products.[20] Most aloe juices today do not contain significant aloin.

According to W. A. Shenstone, two classes of aloins are recognized: (1) nataloins, which yield picric and oxalic acids with nitric acid, and do not give a red coloration with nitric acid; and (2) barbaloins, which yield aloetic acid (C7H2N3O5), chrysammic acid (C7H2N2O6), picric and oxalic acids with nitric acid, being reddened by the acid. This second group may be divided into a-barbaloins, obtained from Barbados Aloe, and reddened in the cold, and b-barbaloins, obtained from Aloe Socotrina and Zanzibar Aloe, reddened by ordinary nitric acid only when warmed or by fuming acid in the cold. Nataloin (2C17H13O7·H2O) forms bright-yellow scales, barbaloin (C17H18O7) prismatic crystals. Aloe species are used in essential oils as a safety measure to dilute the solution before they are applied to the skin.[21]

Aloe perryi, A. barbadensis, A. ferox, and hybrids of this species with A. africana and A. spicata are listed as natural flavoring substances in the US government Electronic Code of Federal Regulations.[22] Aloe socotrina is said to be used in yellow Chartreuse.[23]

Aloe rubrolutea occurs as a charge in heraldry, for example in the Civic Heraldry of Namibia.[24]

Retrieved from "https://ingen.miraheze.org/w/index.php?title=Aloe&oldid=68846"
Categories:
Cookies help us deliver our services. By using our services, you agree to our use of cookies.