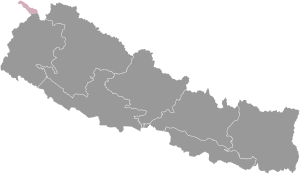 Nepal is composed of seven provinces.[3] They are defined by schedule 4 of the new constitution, by grouping together the existing districts. Two districts however are split in two parts ending up in two different provinces.

Provinces are further divided into districts, of which there are 77 (as of 2017).[6] Each districts is governed by a District Coordination Committee.

Municipalities are places having at least some minimum criteria of population and infrastructure and declared as a municipality by the government. There are 293 municipalities in Nepal.

Urban municipalities are categorized into 3 levels:

Rural municipalities (Gaunpalikas) were established in 2017, replacing the village development committees (VDCs). The main purpose of a gaunpalika resembles that of a VDC, but it has more rights on collection of royalty and taxes and has a higher annual budget than the VDC. Several VDCs were usually combined into each new gaupalika. There are 460 gaunpalikas in Nepal.

Retrieved from "https://ingen.miraheze.org/w/index.php?title=Administrative_divisions_of_Nepal&oldid=47294"
Categories:
Cookies help us deliver our services. By using our services, you agree to our use of cookies.