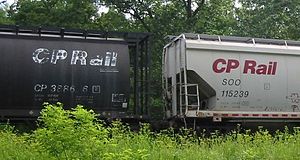 A reporting mark is an alphabetic code of two to four letters used to identify owners or lessees of rolling stock and other equipment used on certain rail transport networks.

In North America the mark, which consists of an alphabetic code of one to four letters, is stenciled on each piece of equipment, along with a one- to six-digit number. This information is used to uniquely identify every such rail car or locomotive, thus allowing it to be tracked by the railroad they are traveling over, which shares the information with other railroads and customers. [1][2]

A covered hopper with SHPX markings

The Association of American Railroads (AAR) assigns marks to all carriers, under authority granted by the U.S. Surface Transportation Board, Transport Canada, and Mexican Government.

Under current practice, the first letter must match the initial letter of the railroad name. As it also acts as a Standard Carrier Alpha Code, the reporting mark cannot conflict with codes in use by other nonrail carriers.[1][2]

Marks ending with the letter "X" are assigned to companies or individuals who own railcars, but are not operating railroads; for example, the TTX Company (formerly Trailer Train Company) is named for its original reporting mark of TTX. In another example, the reporting mark for state-funded Amtrak services in California is CDTX (whereas the usual Amtrak mark is AMTK) because the state transportation agency (Caltrans) owns the equipment used in these services. This may also apply to commuter rail, for example Metrolink in Southern California uses the reporting mark SCAX because the equipment is owned by the Southern California Regional Rail Authority—which owns the Metrolink system—even though it is operated by Amtrak. This is why the reporting mark for CSX Transportation, which is an operating railroad, is CSXT instead of CSX. Private (non-common carrier) freight car owners in Mexico were issued, up until around 1990, reporting marks ending in two X's, possibly to signify that their cars followed different regulations (such as bans on friction bearing trucks) than their American counterparts and so their viability for interchange service was impaired. This often resulted in five-letter reporting marks, an option not otherwise allowed by the AAR. 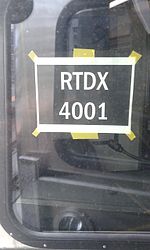 When the owner of a reporting mark is taken over by another company, the old mark becomes the property of the new company. For example, when the Union Pacific Railroad (mark UP) acquired the Chicago and North Western Railway (mark CNW) in the 1990s, it retained the CNW mark rather than immediately repaint all acquired equipment. Some companies own several marks that are used to identify different classes of cars, such as boxcars or gondolas.[2] If the acquiring company discontinues the name or mark of the acquired company, the discontinued mark is referred to as a "fallen flag" railway. Occasionally, long-disused marks are suddenly revived by the companies which now own them. For example, in recent years, the Union Pacific Railroad has begun to use the mark CMO on newly built covered hoppers, gondolas and five-bay coal hoppers. CMO originally belonged to a predecessor of the CNW, which passed it on to them, from which the UP inherited it. Similarly, during the breakup of Conrail, the long-retired marks of the Pennsylvania Railroad (PRR) and New York Central Railroad (NYC) were temporarily brought back and applied to much of Conrail's fleet to signify which cars and locomotives were to go to CSX (all cars labeled NYC) and which to Norfolk Southern (all cars labeled PRR). Some of these cars still retain their temporary NYC marks.

Because of its size, this list has been split into subpages based on the first letter of the reporting mark. Railinc, a subsidiary of the AAR, maintains the active reporting marks for the North American rail industry.

A railway vehicle must be registered in a national vehicle register (NVR) using a 12-digit number derived from the old UIC system of vehicle numbering. The number contains the register country in the third and fourth digit. The keeper of a vehicle is indicated with a company abbreviation of maximum five letters, called Vehicle Keeper Marking (VKM) which must be registered with OTIF and ERA [3] and is unique throughout Europe and parts of Asia and Northern Africa. The VKM must not contain special signs or digits.

The VKM is preceded by the code for the country (according to the alphabetical coding system described in Appendix 4 to the 1949 convention and Article 45(4) of the 1968 convention on road traffic), where the vehicle is registered and a hyphen. Some examples:

When a vehicle is sold it will not normally be transferred to another register. The Czech railways bought large numbers of coaches from ÖBB. The number remained the same but the VKM changed from A-ÖBB to A-ČD.[citation needed]

BLS coaches, on the left still with owner code 63, on the right with country code 85 and VKM BLS

The UIC introduced a uniform numbering system for their members based on a 12-digit number, largely known as UIC number. The third and fourth digit of the number indicated the owner, or more precisely the keeper of the vehicle. Thus each UIC member got a two-digit owner code. With the introduction of national vehicle registers this code became a country code. Some vehicles had to be renumbered as a consequence. The Swiss company BLS Lötschbergbahn had the owner code 63. When their vehicles were registered, they got numbers with the country code 85 for Switzerland and the VKM BLS. Example for an "Einheitswagen" delivered in 1957:

In the United Kingdom, prior to nationalisation, wagons owned by the major railways were marked with codes of two to four letters, these codes normally being the initials of the railway concerned; for example, wagons of the Great Western Railway were marked "G W"; those of the London, Midland and Scottish Railway were marked "L M S", etc. The codes were agreed between the railways and registered with the Railway Clearing House.

In India, wagons owned by the Indian Railways are marked with codes of two to four letters, these codes normally being the initials of the railway divisions concerned along with the Hindi abbreviation; for example, trains of the Western Railway zone are marked "WR" and "प रे"; those of the Central Railway zone are marked "CR" and "मध्य", etc. The codes are agreed between the railways and registered with the Ministry of Railways, Government of India.

Retrieved from "https://ingen.miraheze.org/w/index.php?title=Reporting_mark&oldid=83722"
Categories:
Cookies help us deliver our services. By using our services, you agree to our use of cookies.